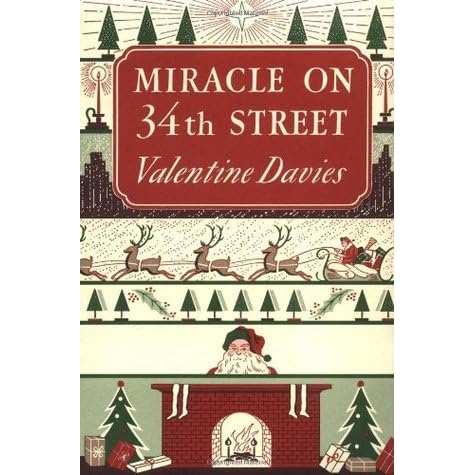 Hey!
I am so excited to be doing this book review for you. I’m teaming up with Paper &Glam for their book club read for this month.  I’ve been wanting to join in with this book for several months, but it never worked out. I’m definitely planning on keeping up with this book club in 2016. Lisamarie, one of the moderators for the book club has already put up the reading list for next year and you can check it out here.

Let’s get on with the book review though. I had seen the 90s version of the movie that starred Dylan McDermott and Mara Wilson about a million times growing up, but I had never read the book. I knew that it was classic and since I was reading it I was also hoping to own it, but unfortunately my Barnes & Noble decided not to stock it with the classic books this year.

If you have never read Miracle on 34th Street. I definitely recommend that you add it to your Christmas reading list for next year. If you’re been reading my reviews for a while you know that I suck at summaries without spoilers, so I’ll give you the synopsis from the back of the book: This is a 20th century Christmas Carol, a warmly humorous story of an old man who thinks he is Santa Claus.  There is plenty of evidence to support his claim. To begin with his name is Kris Kringle. The reindeer in the zoo eat out of his hand. The children who come to Macy’s to see him of course are convinced he is Santa Claus. And so are their parents, especially after he send them to Gimbels for toys that Macy’s does not carry. Rival jewelers begin to get customers sent by Cartier’s and all in all he lets loose such a wave of Christmas cheer and Christmas giving that the city is engulfed in a flood of good will. Unfortuntatly, there are, as always , certain practical soulds who refuse to believe that Kris is Santa Claus. Unmoved by any Christmas spirit, they take steps to have Kris put away as a lunatic. The case goes to court. On the outcome hangs not only Kris’s own fate but the political future of presiding Judge Harper; the integrity of the U.S. Post Office Department; the happiness of Fred Gayley, Kris’s lawyer ; the salvation of Doris Walker, whom Fred loves and who has hired Kris for Macy’s; and the far-ranging dreams of Doris’s once cynical little daughter Susan. Indeed peace on earth and good-will toward men are the issues at stake as Judge Harper renders his verdict.

This story is riddled with amazing quotes on Christmas, the season of giving and having faith. I blogged a quote last Thursday for you to read, and if you haven’t read it here’s the link. Here are a few more below:

“Faith is believing in things when common sense tells you not to.”-Fred Gayley.

“If you didn’t believe you never would get the things you really wanted. Doris had learned that , to her bitter sorrow. Anyone could have faith when everything is fine. But real faith meant believing, rain or shine.”

I loved how short and fast paced this book was. It really kept me wanting to read it and savor it. There were no lulls in the plot or lengthy descriptions of any kind. I was visualizing I was dropped right back into the 1940s of  New York City when Valentine Davies was writing this book. Although, reading it now makes me believe that it could have been set  and applied to any time period and still be applicable. I loved this read and hope to one day add this book to my collection.