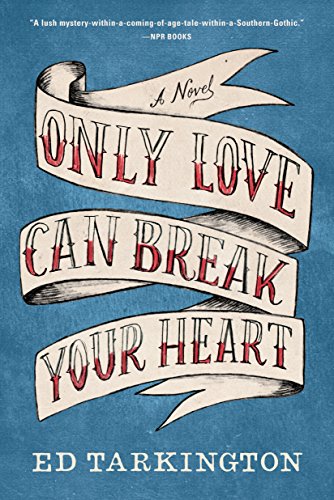 Hey!
I’m back again with yet another book review. There will be eventual real posts coming I just need to organize my thoughts and hope that my life doesn’t explode this year in an awful way. This year already 2 full months in has been a year of growth and change and I’m learning to take it in stride. I’m still hoping to read #52books this year, but if not I’m hoping that it will be higher than last year.The second book for the Paper&Glam book club is Only love can break your heart by Ed Tarkington. The book opens with the following quote and is told in three parts.

How accidentally a fate is made…or how accidental it all may seem when it is inescapable.-Philip Roth

The story is told through the eyes of Rocky or Richard, the half brother to Paul an eccentric teenager that is coming of age in the 1970s. Rocky adores Paul to pieces and it almost breaks his heart when Paul up and leaves the small town that they have grown up all their lives and disappears for several years before suddenly reappearing. This book mainly talks about the dynamic of Paul and Rocky’s relationship as brothers and family thrown in with a little mystery in the last section of the novel.

This was the second read for this book club  and yet another Book of the Month selection. I loved reading this book, even though it took a while to get into. I’ll admit that even though Neil Young is a legend in his own right I didn’t know the song reference, after listening to the song I understand that the author chose this particular song to set the tone of the book and to reference all the things that love can bring with it. This book was filled with so many good quotes throughout it including the quote that opens the book. Here are a few of my favorites:

Life happens in moments, she said to me. Sometimes the most thoughtless, accidental, seemingly irrelevant choice seem to ripple on endlessly.Sometimes the weight of the choice is obvious.

I saw every victory and every failure, all up to the final crushing blow that had left him bound to the prison of his ruined mind. What I saw- what I sensed but could not yet comprehend- was the arc of a life that was not just the rise and fall of a forgettable man, but the story of the American Century: its booms and busts, its catastrophes and regenerations, its fortunes built up from sweat and moxie only to be dashed by bad luck and bad choices, its false hopes and promises broken by the plain fact that we are all mere antic clay, bedeviled by the mystery that animates us.

In this particular book I loved that there was an epilogue that moved the brothers 20 years into the future from where the story stops initially. The story also is seamless in jumping forward in time and making it seem as if you arrived there intentionally. At the end of the book, Rocky says:

For me, a vinyl record will always be a sacred object; the practice of sliding the disc from its musty sleeve and settling it onto the turntable and hearing the warm crack of the needle finding its groove, a sacrament-my Holy Communion.

This quote made me think of all the things in my life that I consider sacred and what routines I have in my own life. Let me know if you have read this book and what you thought about it. If you haven’t checked out the Currently Reading section in my sidebar you should! It will give you a good sense of what blogposts may be coming in the future. If you have any recommendations for books I should read this year, let me know 🙂 I’ll be back soon!