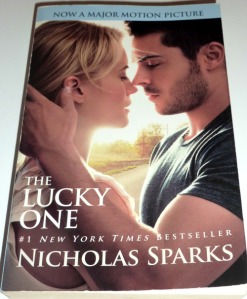 Hey Everyone!
Yes, You are seeing this right, yet another post from me. I do need to do a full catch-up post on my intentions for now until the end of the year, but that will be another post. I finally finished all the books that I’ve started over the past couple of months, so you are going to see a whole bunch of post, but more on that in my catch-up post.

If you have been with me a long time you will know that I have read quite a few of Nicholas Sparks books and I used to be a huge fan. I have not read one of his books in a bit, but when I saw this book in the Used bookstore I decided to pick it up. I also heard that the movie adaptation featuring Zac Efron was good from a friend. I still have yet to watch the movie and may feature that in another post.

The book is written in three parts featuring Logan Thibault, Elizabeth, and Keith Clayton. The book begins with Keith Clayton meeting Logan Thibault and almost arresting him. Logan takes the encounter in stride although, he can see right through Keith Clayton’s facade of calmness. In the following chapters, we find that Logan is a reitred U.S. Marine that went through four tours in Iraq. It was during one of his first tours in Iraq that he finds a photograph of a woman buried in the sand and find that his luck changes. One of Logan’s friend during his time in Iraq believes that the photograph of the woman is Logan’s lucky charm. It isn’t until Victor dies in a boating accident the year before that Logan sets out on a journey across the country to find the woman in the photograph and repay the “debt”.

Logan finds out that the woman in the photograph is Elizabeth and she lives in Hampton,North Carolina with her son Ben and her mother. Logan begins to help Elizabeth out first by working at the kennel, which has become a harder for her to handle since her mother had a stroke a few months earlier. He soon finds himself falling for Elizabeth and the way she carries herself. Elizabeth also begins to take a real interest in Logan and begins to notice how he interacts with the dogs at the kennel and her son Ben. The more time Logan spends with Elizabeth the more he doesn’t want to tell her about the photograph and why he’s there. When Keith finds out that Elizabeth is now hanging out with Logan, it makes him upset to the point of controlling anger. Keith then begins to think that Logan is out to sabotage his world. Logan never thinks about Keith this way, but does some investigating into Keith’s past on his own and finds that he may have been controlling Elizabeth’s life even though they have been apart.

Logan tells Elizabeth what he finds out and when she confronts Keith about these, he denies it and then tries to turn the tables and make Logan into the bad guy. One night a storm hits the North Carolina area pretty hard and Keith and Elizabeth are fighting about all the things that have been happening. Ben, Elizabeth’s son, overhears them and in a panic runs out into the rain and danger.

Okay, I’ll stop now because I’ve probably given too much away as far as a book review is concerned. I’ve been known to do that. The book is great. I liked the ending though it was not as great as I thought it would be though. I hope that if you get a chance you will read this book and hopefully soon I will see the movie and be doing a review on that also.