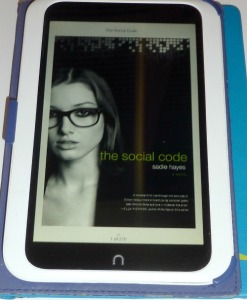 Hey Everyone!
Yes, You are seeing this right, yet another post from me. I do still need to do a full catch-up post on my intentions for now until the end of the year, but that will be another post. I finally finished all the books that I’ve started over the past couple of months, so you are going to see a whole bunch of posts, but more on that later possibly in my catch-up post.

The story of The Social Code begins with fraternal twins Amelia and Adam Dory struggling through their first year at Stanford. Amelia hates all of her classes aside from her computer science classes and spends most of her time coding at the Gates computer lab on campus, while Adam also dislikes most of his classes but tries desperately hard to fit in with his classmates. One night Adam bartends TJ Bristol’s graduation party and while at the party witnesses TJ’s dad , Ted make an announcement that one of the companies that he has invested in had recently been acquired by another company. Adam is blown away that in just one night nearly all the people in attendance had made thousands of dollars. Also at the party Adam also meets Ted’s daughter, Lisa and immediately becomes smitten with her. Adam gets so excited about what happened that he tries to convince Amelia to start a company with him. Amelia thinks that the idea of starting a company just to sell it and make money is stupid and accidentally hacks the Gibly website to prove to Adam that the efforts of the company are shady and not right. Patty, Ameila’s roommate and friend to the Bristol’s, overhears the conversation between Adam and Amelia and decides to do some snooping of her own. She tells Ted Bristol what she knows and he immediately becomes furious and is determined to get rid of Amelia Dory and her underhandness for good.

Amelia finally finishes coding her app and tries it out one day at the University Cafe where TJ is interviewing with Roger Fenway, CEO and developer like his dad. Roger Fenway is so impressed that Amelia’s app has the ability to control the tv from her phone that he invites her to start a company and join the incubator that he is starting. Roger Fenway throughs TJ to the side and ignores his pitch entirely , but eventually hires his as a business/marketing consultant for Amelia’s app. Amelia finally agrees to create a company as long as Adam is apart of it. She names the company Doreye in honor of the twins.

I won’t give any spoilers away, but there is a slight cliff hanger ending at the end of the novel. I didn’t love this book as much as I liked the first book I read. The short chapters of the book definitely made it a fast read once you got into the book. I bought this book on my kindle which makes it the first book that I’ve finished on my kindle and the short chapters definitely helped with finishing it. I’ve heard that there maybe another book in the series from the rumors floating around the internet, but I haven’t found any confirmation yet.  I definitely recommend this book if you are looking for a light read. I look forward to reading more from this author in the future. I’ll hopefully have more book reviews coming your way very soon.