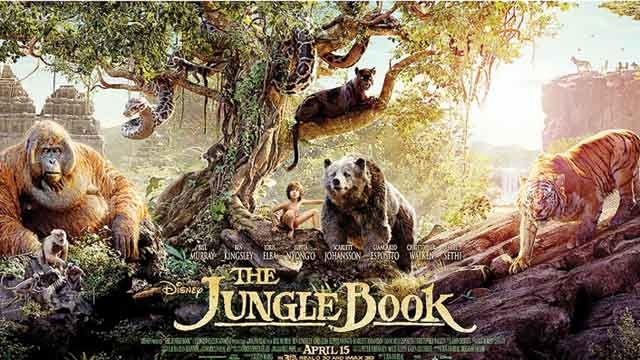 It has been a little bit since  minute I did a movie review, but with all the summer movies coming out I wanted to review at least a few of them. I’m trying to keep the number of movie reviews to a minimum on here due to some personal issues not due to the movies. If you would like me to review a particular movie please let me know and I will look into it. I know that this movie opened a while ago, but we never got around to watching it until now because of there were several other movies and things to do.

Yes, The Boy and I actually did want to to see this movie, it just didn’t happen until now. In case you weren’t aware. This movie is Disney’s live action take on the book by Rudyard Kipling and it pays tribute to the old animated version in several portions.

A short synopsis of the story is as follows. The story narrated through the eyes of Bagheera the panther who rescued a “man cub” named Mowgli and had him raised by the wolves. In having him raised by wolves Bagheera constantly encourages Mowgli to learn the ways of the wolves and to not use human tricks like building tools. One day during a water truce Sher Khan meets Mowgli and issues a warning to all the animals that he will have Mowgli killed before the season is out. The wolves have a strong debate on whether or not to keep Mowgli, but before they came make a final decision Mowgli voluntarily leaves because he doesn’t want anyone dying for him. Bagheera assures Raksha, Mowgli’s wolf mom, that he will take Mowgli to the man village. Along the way to the village Sher Khan ambushes them and injures Bagheera, but Mowgli escapes. Bagheera tells Mowgli that he will find him near the village shortly. On his way to the village and away from Sher Khan, Mowgli meets Kaa, a python who hypnotizes him and tells him about how he came to live in the jungle and about man’s red flower “fire”. Mowgli is saved by a bear named Baloo. Bagheera finds Mowgli with Baloo and is upset that Mowgli has not gone into the village as agreed. An argument ensues since Mowgli is intent on not leaving the jungle. During the night, Mowgli finds a herd of elephants gathered around a ditch, and uses his vines to save a baby elephant from the ditch. Although Baloo and Bagheera are both impressed, Baloo realizes that he cannot guarantee Mowgli’s safety after learning that he is being hunted by Sher Khan. Mowgli is kidnapped by the (monkeys) who present him to their leader, a giant ape named King Louie. Assuming that all humans can make fire, King Louie offers Mowgli protection from Sher Khan in exchange for it. As Louie chases Mowgli through his temple, he informs Mowgli of Akela’s death. Louie’s rampage eventually causes his temple to crumble on top of him. Furious that Baloo and Bagheera never told him about Akela’s death, Mowgli goes to confront Sher Khan alone. Mowgli steals a lit torch at the village to use as a weapon and heads back to the jungle, accidentally starting a wildfire in the process. He confronts Sher Khan, who argues that Mowgli has made himself the enemy of the jungle by causing the wildfire. Mowgli throws the torch into the water, giving Sher Khan the advantage. Baloo, Bagheera, and the wolf pack intervene and hold Sher Khan off, giving Mowgli enough time to set a trap. He lures Shere Khan up a dead tree and onto a branch, which breaks under the tiger’s weight, and Shere Khan falls to his death into the fire below. Mowgli then directs the elephants to divert the river and put out the fire. Mowgli decides to utilize his equipment and tricks for his own use, having found his true home and calling with his wolf family, Baloo, and Bagheera.

I loved this movie probably even more than the cartoon version. I felt that the director, Jon Favreau did a good job of capturing the essence of the original Jungle Book movie. I have not read the book, so I can not tell you if he kept to the book version since there were some variations from the cartoon version. The one thing that I thought was a little strange in the movie was that not all the animals that Mowgli encountered could talk and it seemed strange that some of them didn’t. I also found it strange that Mowgli’s runt wolf brother, Grey, never grew. Overall, I highly recommend that you see this movie nearly everything about it was amazing. I hope to see you in another post very soon!