Hey!
For the month of October I’ve dubbed it Scaretober in which I will be blogging every day in October. No, it’s not just random blogs in October but specifically scary movies movies. I’m definitely not one of those girls that enjoys scary movies by any means in fact this is a HUGE challenge for me since I’m such a wimp when it comes down to it. Some of the movies reviewed will be super scary and others will just be 90′s cheesy scary compared to today’s standards. There will be a few days during this month that I will be putting up more than one posts, because sometimes you can’t hold any awesome back when it comes to the blog.
Today’s movie is Paranorman 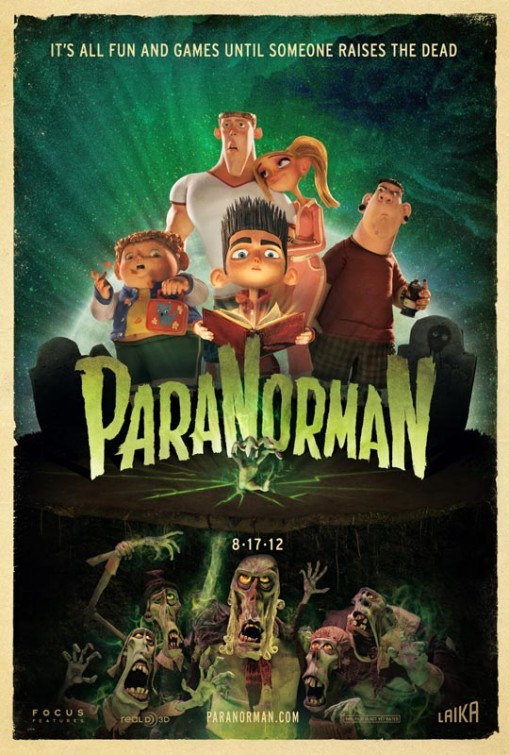 The movie Paranorman is about a young boy named Norman who is fascinated with the paranormal, he even has a special gift for seeing dead people that are still trapped on earth. The problem with Norman’s gift is that he treats it like it is completely normal for him and when people in his town see Norman out and about they think that he is strange.  Even his family is convinced he is strange, one day Norman gets a visit from his astranged crazy uncle, Mr. Penderghast who tells him that he will be the one to stop the witch’s curse. Norman is so freaked out by this he runs away.  At school Norman is befriended by Neil the school’s fat kid even though he insists that he does not want friends. Mr. Penderghast dies before telling Norman what to do to stop the witch’s curse for the year and then he comes back to haunt Norman. Norman goes to Mr. Penderghast’s house to get a book to read to the witch and finds out that he has gone to the wrong spot read the book since the witch was not buried with the others. Norman’s town then becomes overrun with zombies and it is only Norman and his friends can save the town. The zombies come and find Norman and the head zombie then leads Norman and his family to the spot where the witch is buried and instead of reading the book to the witch Norman decides to talk to her. The witch at first refuses to listen to Norman, but after a bit realizes that Norman is just like her with the special gift for seeing dead people that are trapped on earth and having people be so afraid of them that they act in scared ways. Soon the witch is no longer a wtich but a scared little girl who just wants to see her mother again. She eventually finds peace and moves on when she does so do the zombies that she has cursed. The town cleans up the mess for the night and life gets a little better for Norman. His family is still not okay with him seeing and interacting with dead people , but they have come to terms that he did save the town and his gift changed their lives.

This movie is cute and done in the claymation style that is similar to The Nightmare before Christmas. However this movie is done in a more cute style and with more of a lesson that just a cute film. I admire Norman and Neil’s ability to not care about what other people think about them and just be okay with who they are. I definitely recommend this movie if you are a parent or a child going through some tough times at school. I hope that you enjoyed all the posts in the Scaretober series and that you will keep following my blog to see more movie reviews or just more about my life.

So, in case you haven't noticed. I've slowly start