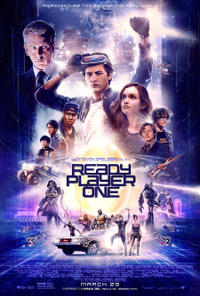 Hey!
I’m back with yet another review , yes I know 2 movie reviews in a week! What?!? Matt and I went to see quite a bit of movies in March, but now that I’m on a no spend for a bit, we’ll slow the movie train down for a while.

If you are familiar with the book you can read about my love for that here. However if you not read that book that would be good in this case. The general synopsis of the movie is that we are now in the year 2048 and nearly everyone in the world is poor beyond belief. In order to escape this horrid reality we all live in the virtual world called the Oasis. The formation of the Oasis was built by Ogden Morrow and James Halliday. Halliday, who lived through the 1980s in all its glory, decided that upon his death instead of naming an heir to his fortune in his will he would create an Easter egg in his game. Fast forward a few years and there are a few people that are still in the hunt to find the Easter egg, but the hype has died down quite a bit. We meet Wade Watts, an average high school student that is obsessed with Halliday and his legacy and all at once he figures out the answer to the first leg of Halliday’s quest. Soon his friends also finish the first leg and the ioi’s or Sixers aren’t far behind. Wade quickly in the virtual world falls in love with an avatar who he only knows as Artemis, who says that she is trying to find the Easter egg because the ioi and it’s head Nolan Sorrento, killed her father and have no good intentions.

I won’t say anymore about the plot because I’m sure that you can figure out a good portion of the ending. As a fan of the book, I will say that I was disappointed that the movie didn’t follow all the plot points of the book. That being said after my boyfriend talked me down off that ledge, if you take the movie as it is and not the book to movie adaptation we had hoped for it, it’s great. Spielberg is in his finest creating a love letter to the 1980s minus nearly all his directorial movies because he refused to be that arrogant. There are hints from other movies that he worked on which was a good comprise. I loved the tribute to Kubrick in the film, which was so fittingly done. As much as I had wished for more from the movie, the movie overall was good.

It was in no means the book to movie adaptation that we as reader fans had hoped for, but it was a loving tribute. If you’ve seen this movie, let me know what you thought or if you have read the book and were wondering if the movie in theaters was worth the price let me know. You can always message me for spoilers.