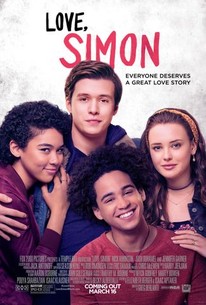 Hey!
So I thought that I would come back here with yet another review. This time it is a movie review for Love, Simon. This movie is based on the book Simon vs the homosapiens agenda by Becky Allbertali. Since, the movie has been out only a week I thought this would be fairly timely, I’ll first off have to admit that I haven’t read the book yet, so a review on the book will be coming later this year. The book had gotten so many rave reviews that I was expecting no less from the movie.

I almost had to talk my boyfriend into going this movie, although he says that he didn’t need that much arm twisting since the trailers for this movie looked so good. Seriously, you should go watch a few if you haven’t already. We saw this movie the Wednesday after it opened and the theater was still packed even for a week night!

In the movie, you follow the story of Simon narrated by Simon, but from his letters to a guy named Blue. Well at least the first part of the movie is narrated through a letter, but you won’t find this out until later. In the movie the school Simon goes to uses a message board to communicate messages anonymously and one day Simon is alerted to a post by his friends about a boy on a Ferris wheel. Simon is intrigued and feels that he can relate to this person that he starts to communicate anonymously with him at first and then he accidentally signs one of his letters revealing his identity. Blue doesn’t feel so inclined to reveal his identity in the same manner. In a fluke of strange luck, Simon one day is interrupted writing an email to Blue on the school’s computer by the school’s principal and doesn’t think to close his email. The computer is then used by the school’s clown who decides to use the information Simon has tried to keep private for so long against him. Simon ends up making some bad decisions affecting his friends and then the school’s clown decides to out him on the public forum. Simon isn’t ready to be outed and feels his world come crashing down.

I won’t spoil the ending, but in case you haven’t figured it out everything turns out relatively ok in the end. As the boyfriend would say, the whole movie had a very John Hughes vibe to it. I loved it from the very start to the very end. It deserves all the praise it is getting by everyone. The cast was great and it was good to see Katherine Langford, of 13 reasons why fame, play someone who isn’t dead. Also in case I haven’t sold you on seeing the movie yet, Jack Antonoff of Bleachers and his own fame does the musical score for the film, so even if you hate the acting at least get lost in the music.

Let me know if you have seen this film and what you thought of it. Does it live up to the hype? Is it super different from the book if you have read that? More posts and reviews coming soon!