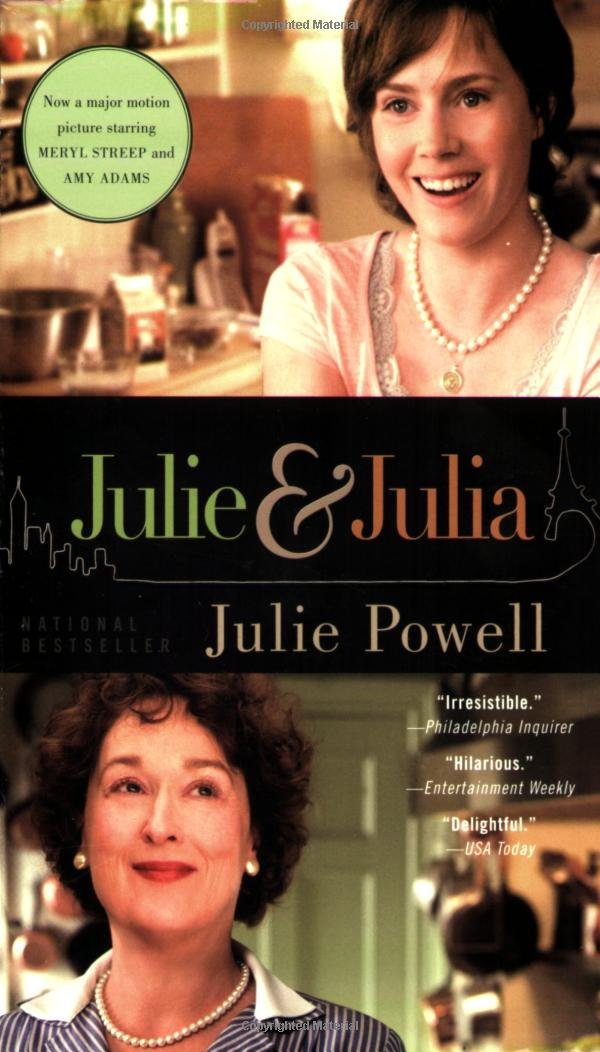 I know that it has been a while since I’ve written on here, but don’t worry I’ve still been reading. I will probably end up doing a Currently post soon with everything that has been happening lately. In case you haven’t figured it out yet, this review is going to be on Julie & Julia. This will mainly be a book review, but since the movie recently appeared on Netflix I did have a chance to rewatch it and will add in some comparisons toward the end of the post.

In the book written by Julie Powell, Julie talks about how her life living in New York post 9/11 is and how she is struggling to deal with the corporate government job. When Julie’s life becomes too much for her she finds herself heading home and stealing her mother’s reliable Mastering the Art of French Cooking by Julia Child. It isn’t long before Julie is convinced by her husband to take on the recipes in the book and tell people about it in the form of a blog. Mostly because blogging was the first wave of social media in the early 2000s.

In case you haven’t read the book or watched the movie I won’t spoil the end. It ends up okay at the end of the book. I initially watched the movie because the plot sounded intriguing and had hopes of reading the book soon after, but that didn’t happen until well now. I’ll admit that I did google Julie Powell while reading the book, just to see what happened to her. I was a bit disappointed to find out that while she and her husband are still together, she did admit to cheating on him between the publishing of the first book and her second book. Knowing that may have clouded my views on the relationship of the Powells portrayed in the book. I still found the book intriguing and much more relatable than the movie. There addition to the Powells having a live in relative during this time, which is mentioned occasionally in the book. I loved that the book was written in blogposts form taking on a recipe as well as doing some back story.

Have you read this book? Have you watched the movie? Let me know what you have been reading lately. As always you can follow what I’ve been reading on my goodreads which is in the sidebar. If you see anything that I’ve read, but don’t cover on the here let me know and I will definitely cover it. See you soon!

So, in case you haven't noticed. I've slowly start