Hey!
For the month of October I’ve dubbed it Scaretober in which I will be blogging every day in October. No, it’s not just random blogs in October but specifically scary movies movies. I’m definitely not one of those girls that enjoys scary movies by any means in fact this is a HUGE challenge for me since I’m such a wimp when it comes down to it. Some of the movies reviewed will be super scary and others will just be 90′s cheesy scary compared to today’s standards. There will be a few days during this month that I will be putting up more than one posts, because sometimes you can’t hold any awesome back when it comes to the blog.
Today’s movie is Chatroom 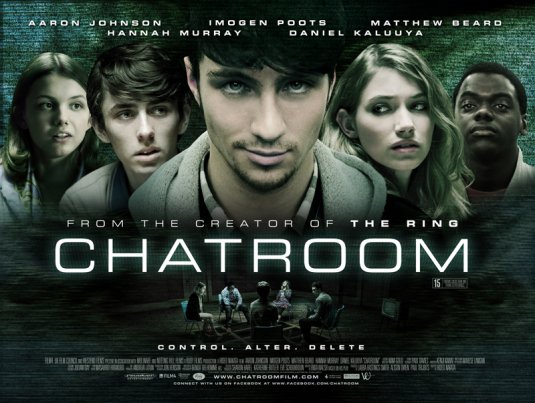 This movie is a indie UK film directed by Hideo Nakata. The movie begins with a teenage boy, William, walking into a hallway of a building and finding an empty door and spray paints the words “Chelsea Teens” on the door. Soon after four other teens enter the room and begin talking to one another during that conversation they agree to chat often. Soon after they find a need to create a security code to keep other people out. The movie then transfers to real time in which you find out that William has just setup a chat room to talk to other teens in the area and none of them have ever met in real life. As the days go by pretty soon William is provoking the other teens into giving into their bad behavior. He begins by telling Mo that it is ok to have feelings for his friend’s younger sister, telling Emily that it is ok for her to act out against her stepmother, and flirting with Eva. William then decides that it would be a good idea to torment Jim since he has told the group that he has many problems. William slowly begins to convince that Jim that this life would be better off without him and that his mother would be able to manage on her own.  In the final arc of the movie the rest of the teens come to the realization of how evil William is and that he has been tormenting Jim and they come together to save Jim. William then goes after Jim in real life and  tries to kill him just as the police chase him down and he commits suicide.

I thought that this movie was really well done and wish that this movie had gotten a bit more press when it was first released in 2010 mainly because it talks about bullying on the internet. The visuals  in this movie are amazing and I love the fact that all the chat rooms appear to be actually different rooms in a building. Hopefully I will see you tomorrow with another Scaretober review.