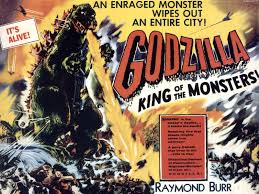 First off I would like to state that this movie was made in 1956 and is shot in black and white in case you were not aware. The movie is narrated by a reporter named Steve Martin who has stopped in Tokyo during the time Godzilla surfaced. The story begins from the attack on Tokyo and then rewinds to tell you everything that happened up to the point and then shows you the ending, which is always interesting concept in movies. The night Steve arrives in Tokyo a ship was attack by a flash and light and then disappeared into the ocean, when several rescue ships go looking for the ship they are also swallowed into the ocean. Steve reports to his boss in Chicago that 8 ships have disappeared since the first incident with no survivors living long enough to tell the story of what happened. Steve is invited along with several scientists to visit a nearby island where the ships have been disappearing to see what the natives know. While on the island Steve finds out that the natives say a monster they have been offering gifts to in the past has finally surfaced. When the scientists do their research they find that the creature is radioactive and has contaminated everywhere he has touched.  During one of the research missions the monster surfaces and terrorizes the island and the natives call it Godzilla. The scientists and Steve return to Tokyo and report their findings as a creature from the Jurassic age being awaken because of the hydrogen bomb testing. Godzilla then appears in Tokyo harbor but leaves before much destruction is caused. During this time, Steve’s friend Dr. Serazawa has found a way to save the world, but has only told Emiko because he does not want anyone to use his research for evil. Godzilla surfaces out of Tokyo Bay again and terrorizes Tokyo while Steve gives a play by play recording to his boss in Chicago. After the devastation Emiko finds Steve in the hospital and reveals to him that Dr. Serazawa has a means for stopping Godzilla. Steve asks her to convince him to use it to save the world. After much dilemma, Dr. Serazawa finally agrees to save the world but not before destroying his research. Dr. Serazawa saves the world, Godzilla is defeated and Dr. Serazawa also takes his own life in the process.

This is a very 1950s movie I’m sorry to say. It is good by those standards and it was worth watching, but aside from that not scary at all. I’m not even quite sure why I was afraid of Godzilla when I was younger perhaps it is because of the reputation surrounding the legend. Well, hopefully I will see you again tomorrow with a much better movie review for Scaretober.  Also let me know in the comments if you would like to watch the rest of the Godzilla series.