Today’s movie is A Nightmare on Elm Street. 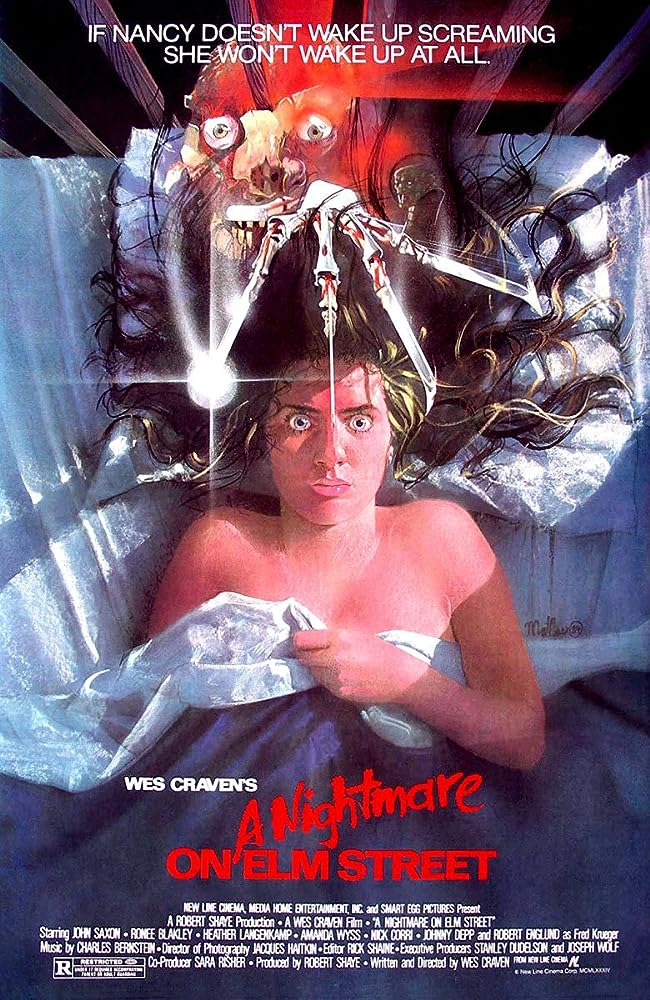 I had been wanting to watch this movie for sometime and when it finally appeared on Netflix I jumped at the chance. This 1984 film directed by Wes Craven and was the first film debut of Johnny Depp gave way to a whole generation of horror films and created a franchise known the world over.

The basic synopsis of the movie is that four teenagers are stalked through their dreams by a mysterious disfigured man, who is later identified as Freddie Krueger. The film opens with a dream sequence with the main characters Tina being chased by Freddie in her dream. She then awakes with a start and finds herself bleeding. The next night Tina has her friends over since she did not want to be alone since her nightmare the night before felt all too real. While her friends are over Tina encounters Freddie in her dreams again and this time he ends up killing her in the presence of her boyfriend Rob. When the police come, they don’t believe that Rob didn’t do it and decide to hold him. Nancy, Tina’s friend goes to school the next day despite having the trauma the night before. Nancy falls asleep in class and finds Freddy in her dreams and then when she is startled awake finds a burn on her arm that is similar to what happened in her dream. Nancy begins to develops a theory about what is happening and convinces her boyfriend Glenn to help her test the theory. That night Nancy falls asleep and in her dream goes to visit Rob in jail only to encounter Freddy again at the jailhouse. Unfortunately, her alarm wakes her up in time to save her but she doesn’t make it to the jailhouse in time to save Rob from Freddy. At Rob’s funeral in the following days all the parents of the teenagers exchange glances that imply that they know what is going on. Nancy’s mom takes her to a sleep clinic to confirm her suspicions about who the killer is and they are confirmed when Nancy pulls Freddy’s hat through the dream world into the real world.

Nancy’s mom finally comes clean about who Freddy Krueger is to Nancy and Nancy gets upset. Nancy determined to defeat Freddy once and for all devises a plan with Glenn to trick him into coming into the real world.

I will keep to my promise and not spoil the entire movie for you. I thought this movie was very well done. It definitely gave me a scare although I was not that impressed with the ending since it was similar to the ending of the original Carrie. Although that ending is pretty ingenious for a horror movie. I would definitely recommend that everyone watch this movie since Freddy Krueger is such an iconic character. Besides that a Wes Craven movie is definitely something to watch.

I hope that you enjoyed the first day of Scaretober and I hope that you’ll keep coming back throughout the month to see what other movies I watch. Also if you would like to see what movies that I have watched in the past you can find them here.