Today’s movie is Queen of the Damned. 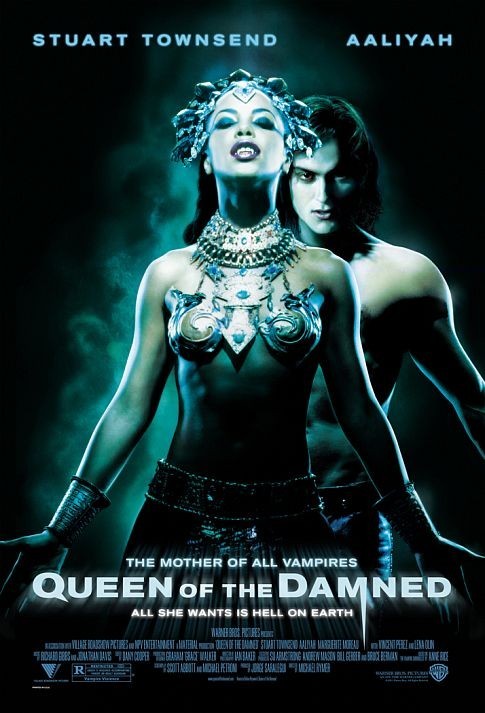 I have heard about Queen of the Damned since its release in 2002. Since I have friends who are serious vampires freaks,I knew that I had to add the movie to my list when it finally appeared on Netflix.

Here’s the rundown on the movie:This movie is based on an Anne Rice novel and is suppose to be a companion to Interview with the Vampire. Also in case you have been living under a rock for many years this movie also stars the late Aaliyah who died in a plane crash before the movie was finished. The movie is mainly narrated Lestat, who is still the most well known vampire of all time. Lestat states that he put himself asleep for several hundred years before being awoken to rock music. Lestat goes to meet the band and decides that the band will be the means to conquer the world. As Lestat’s band begins drawing worldwide attention it also draws the attention of a historian named Jesse. She presents the evidence for Lestat being a vampire to a committee that also includes her friend David. David tells her that vampires do exists and that he has been chasing the oldest vampire, Marius for a very long time. He knows that Marius is the oldest vampire because he has Lestat’s journal and Lestat stated that Marius created him. Jesse even with all the evidence continues to seek out Lestat. In seeking out Lestat she finds that she was partially raised by a coven of vampires. Lestat’s music has awoken the queen of the vampires Akesha and now she is out to conquer the world.

I will keep to my promise and not spoil this movie entirely. I loved this movie to pieces to say the least. The rock soundtrack from the movie matches perfectly in time with the movie and will leave you wanting more. I enjoyed Stuart Townsend’s portrayal of Lestat more than I have ever enjoyed Tom Cruise’s portrayal of Lestat. This part of the story of Lestat’s journey left me wanting more and I hope that someday they’ll continue Anne Rice’s vampire stories. I didn’t find this movie scary although Akesha is a bit overwhelming as a vampire. I would definitely recommend watching this movie at least once.