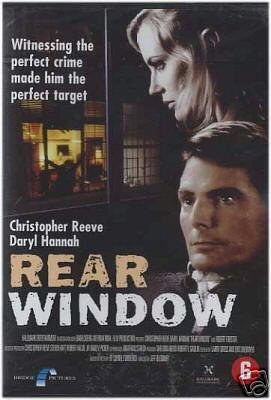 I have heard about Rear Window as a thriller for many years. I knew that I had to add the movie to my list when it finally appeared on Netflix. I do have to stipulate that this is the made for tv version done in 1998 and not the original.

Here’s the rundown on the movie:a business man named Jason played by Christopher Reeve is injured in a car accident. Jason is paralyzed from the neck down and is barely able to do anything on his own. After his house is remade to work with his disability Jason  desires to return to life as it was before the accident only to find out that he must now work with a partner on his latest project. His partner Claudia played by Daryl Hannah is competent and does good work on the project. Since Jason is not able to get out as much as he used to, he has taken to spying on his neighbors. He especially takes an interested in a woman that appears to be in a relationship with a sculptor. One night Jason hears noises and he believes that the sculptor has killed the woman though there is no evidence to prove it.

I will keep to my promise and not spoil this movie entirely. I found this movie actually rather dumb. Aside from hearing what possibly could be a crime and not being able to do anything about it this movie wasn’t scary at all. There was a moment towards the end of the movie that I felt a bit scared, but it was not as intense as it could be. This movie made me definitely more aware of the problems a person with a disability could face when faced with these situations. I appreciated seeing Christopher Reeve and Daryl Hannah on screen again, but the acting in this appeared forced. I would love to see the original and see how it compares.