Today’s movie is The Host. 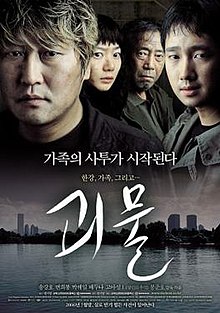 This 2006 Korean film was one that made an appearance on Netflix. If you have read my series in the past you will know that I have some doubts about the reliability of Netflix. I thought that I would still give it a chance this year.

The film begins in the year 2000 when an American pathologist orders his Korean assistant to dump 200 bottles of formaldehyde down the drain leading to the Han River. Flash forward 2 years later an 2 fisherman are fishing in the river and see a mutated fish and release it back into the river before it bites them. The fisherman leave catching nothing. Flash forward 4 more years and a guy is about to jump off the bridge when he spots something moving in the water before he jumps and decides to jump anyway. Later in 2006 a man named Gang-du Park and his family run a food truck near the river. When he is delivering food to some customers a monster appears out of the water and chased people around before grabbing his sister, Hyun-seo. The waterfront park is closed off after the incident and the family is thrown into quarantine. Gang-du repeatedly tells authorities that his sister is alive and that they need to find her. The family eventually escapes from quarantine to look for the girl in the sewers, Gang-du’s father is killed by the monster and found by the police in a shoot-out. Gang-du is then also captured. Gang-du’s brother and sister escape police custody and continue the search for Hyun-seo.

I will keep to my promise and not spoil the entire movie for you. This movie was pretty terrifying ,but also predictable since if you have watched any scary movie on contagions you will soon realize that the government tries to hide or contain the viruses in the worst way possible. The creature in the movie is also never really identified and the way it kills and captures humans is especially interesting. I felt that this movie was a bit too predictable in many ways.

I hope that you enjoyed this selection of the Scaretober series and that you will keep coming back throughout the month to see what other movies I watch. Also if you would like to see what movies that I have watched in the past you can find them here.  Also feel free to leave suggestions on videos or movies that you think I should watch. See you soon!