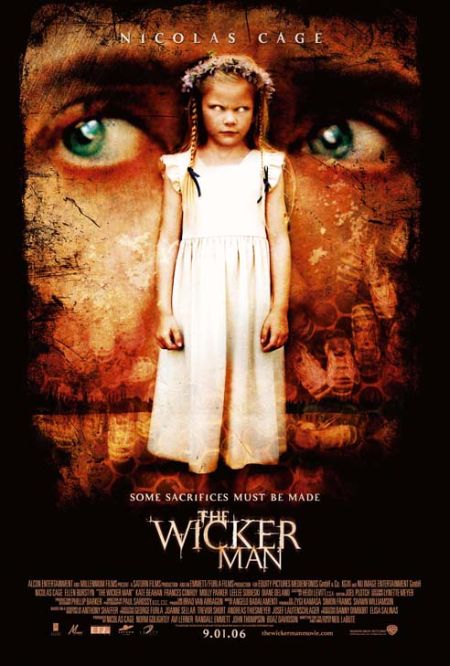 I had heard about this movie for a bit. I didn’t know it was a remake until recently, I wish that Netflix had the original in the streaming edition, but alas it does not so perhaps another year I’ll watch the original and let you know how it compares.

Here’s the rundown on the movie: Nicholas Cage plays a cop named Edward who does a routine stop of a car speeding into town, when the young girl throws her doll out of the car. Just as Edward goes to return the doll to its owner the car is hit by a semi causing the car to burst into flames. Edward tries to save the girl, but is thrown to the ground when the flames cackle again. While on leave after the accident Edward receives a letter from his former fiancee saying that her daughter is missing and to come quickly to a place called Summer Isles. Edward manages to get to Summer Isles and after some run in with the townspeople finally runs into Willow his former fiancee. Willow explains to Edward that Rowan is his daughter and that she has been missing for 5 days and to not trust the townspeople because they lie. Edward spends the next few days hunting for his daughter being plagued by flashbacks of the accident.

I will keep to my promise and not spoil this movie entirely. This movie had me a little terrified and on the edge of my seat the entire time. I was absolutely horrified by the ending because it definitely was not what I was expecting. I know that Nicholas Cage has fallen into some hard times , but I didn’t hate him in this movie. After watching this and people saying that he did an awful job in this movie it makes me want to watch the original just to see what that is like. I would recommend watching this movie if you haven’t seen the original because it will definitely keep you on the edge of your seat.

I hope that you will keep following along with this Scaretober series to see what other movies I review. If you have any other recommendations for movies that need to be in this series let me know. See you soon!