Today’s movie is The Pet Semetary 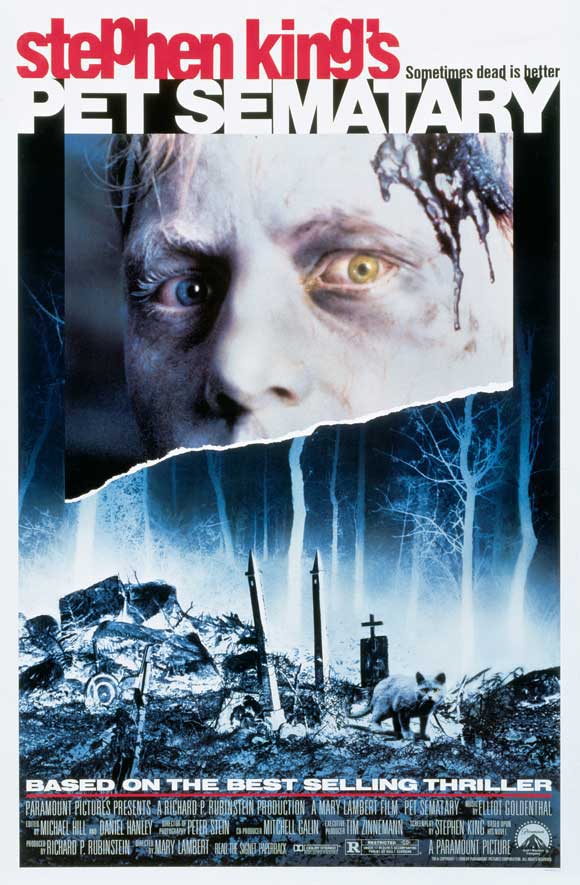 This movie is based on a novel of the same title by Stephen King, the king of scare. A family the Creeds moves into a house on the outskirts of a small mountain town. The house lies on a rather straight stretch of road that truckers speed through regularly. Their neighbor, Judd is a nice old man who tells them about the path to the Pet Semetary and other stories about the town. One day, Dr. Creed is at work and tries to save a Pascow’s life ( boy hit by a truck) and fails. Dr. Creed is alone with Pascow when his soul is taken from his body, but not before he has a chance to leave Dr. Creed with some haunting words. Pascow’s death would be the first in a series of 4 major deaths in the movie. The next person to die is the Creeds maid who hangs herself because she can’t take anymore pain in her life. The next death in the movie is the family cat, Church, who is hit by a speeding truck. Dr. Creed is a bit devastated that he will have to break this news to his daughter. Judd says that there is a way that his daughter may not ever have to know and takes Dr. Creed to an Indian burial ground beyond the Pet Semetary.  The next day Church comes back to the house, but it leaves Dr. Creed wondering what happened. Judd confesses that the burial ground has special powers, but that things that are brought back to life are never the same. He then tells Dr. Creed about his own experience with the burial ground.

The last major death in the movie is that of Dr. Creed’s young son,Gage. It is at this point in the movie that the Creed family aside from the daughter loses touch with reality. Dr. Creed is so consumed with grief that he exhumes, Gage’s body after the burial and takes him up to the burial ground, while his wife and  daughter are away. Judd has warned Dr. Creed that humans should not be buried in the burial ground because it simply isn’t right. Gage, comes back but he no longer has a sweet disposition but wants to kill everyone in sight. Dr. Creed kills Church once more and then when he realizes that Gage has become evil has to kill Gage again and sets fire to Judd’s house burning all the evil with it. Dr. Creed reasons that Gage turned evil because he waited too long to exhume his body and that it won’t be the same for his wife.  Well, let’s just say that there is a part 2 to this movie.

I had originally picked this movie because I thought the Edward Furlong, one of my childhood celebrity crushes was in it. He is not in this one, but he does play a part in Pet Semetary 2. The movie is good and left me scared right up until the end.  Even though some of the more bloody scenes you can tell are staged, the movie will still give you a good scare. Towards the end of the movie Gage reminded me a bit of the Chucky doll from the back. I will be back later on today with another movie review for you. I’m sorry that this is so late.