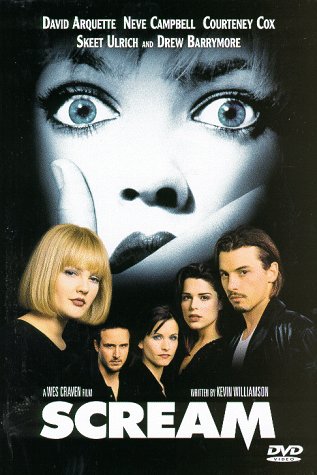 This movie stars Drew Barrymore, Neve Campbell, Skeet Ulrich, Matt Lillard, Courtney Cox, and David Arquette just to name a few celebrities. It is set what appears to be a sleepy East coast town of Woodboro in which it’s basically the countryside and the houses are super far apart. The first opening sequence of the movie is Casey,Drew Barrymore, at home getting ready for a night in, when she gets a call from a stranger that proceeds to ask her a bunch of questions. When Casey gets bored and annoyed with the conversation she hangs up. The caller calls Casey back several times before threatening Casey’s life. He then proceeds to play a game which both Casey and her football player boyfriend lose. In the next scene you see Billy,Skeet Ulrich, climbing through Sidney, Neve Campbell,’s window and them getting a bit frisky. The next day you at school you find out that Casey and her boyfriend were found brutally murdered the night before and that this is the week before a one year anniversary of Sidney’s mother’s brutal murder. To cut the summary short you find out that the creepy caller was actually Billy and Stuart playing ghost face the brutal murderer and a whole bunch of people die over the course of one night.

I was actually impressed that I was not that scared to watch this movie and barely even jumped. I was a bit grossed out during the movie especially during all the murder sequences. It was strange to see Drew Barrymore as a platinum blonde and bit weird to have her die in the first 5 minutes of the movie. Billy climbing through Sidney’s window twice in the movie reminded me of Dawson’s Creek era and I had nearly forgotten that Dawson’s Creek premiered around this time also. It’s crazy to see 2 different types of cell phones in the movie, the brick Courtney Cox’s character uses and the slimline Skeet Ulrich’s character uses.  It seems really odd in the movie that Sidney has to go home and check on the her house instead of going straight over to Tatum’s house after school that leaves her in the house for at least 4 hours by herself. Also something that I will need to remember in the rest of the series are the scary movie commandments that Randy lives by.

Let me know if you watched this movie when you were younger or have watched it recently. Also let me know if you have any suggestions for movies that I should watch during this month. See you tomorrow with another exciting post!